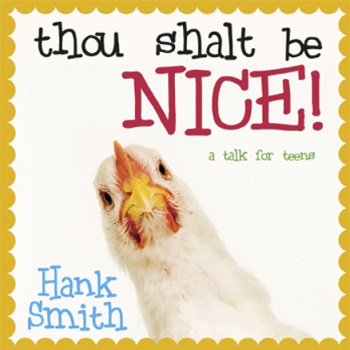 Thou Shalt Be Nice!

When it comes to chickens, Hank Smith knows a lot more than he used to. Before he met his future father-in-law, Hank’s experience with chickens was pretty much limited to the fingerlickin’ good kind or those little nugget things you dip in sauce. But Hank learned that chickens have a “pecking order” within the flock and that at the bottom of this order is often found a scrawny, pathetic bird just struggling to survive.

Hank also learned that people can be a lot like chickens–especially in junior high and high school. In order to make themselves more “popular,” teens often break into little groups and pick on someone who doesn’t quite fit in. In this entertaining and eye-opening talk, Brother Smith describes how his life was changed by the example of someone who didn’t follow the flock, but instead reached out to others to help them feel loved. He shares what he calls the “Laura Larsen Challenge” as he invites others to rise above the pecking order and be nice!